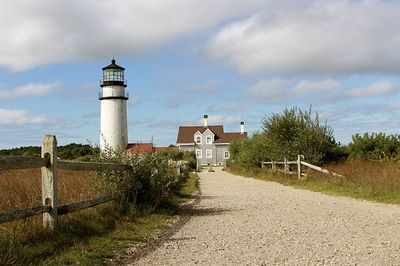 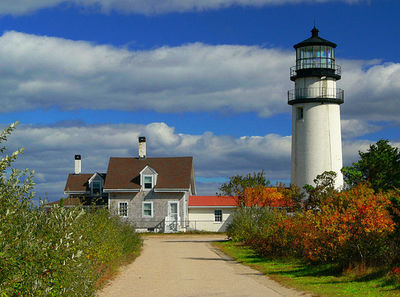 ​Map of Cape Cod Lighthouses
To best see the lighthouse locations on the map above:
* First be sure to enlarge the map to full screen using the icon near the top right of the map. Then you can zoom way in.
*  Once you have done that, depending on your setup, clicking on a  star on the map view in your phone, or the star followed by the location name and its arrow, will set the destination for  Google Maps to take you to the location directly using Google voice instructions and the free GPS built in to your phone.
​ It's awesome - try it out!
Note: Full use of the maps requires enabling location permissions in both the Chrome app and the Google Maps app.
​*  Once you open the full screen street map and zoom way in, changing to the satellite view
will show the exact parking locations for each lighthouse.
Some lighthouses do not have any parking, though.  In that case, there is no red star on the map.
​History of Lighthouse Lighting 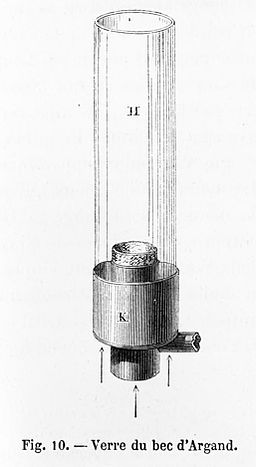 Along with the overall appearance and design of lighthouses over the years, the specific lighting source used in lighthouses has changed over the years as well. At first, open fires and candles were used, or wicks floating in oil. 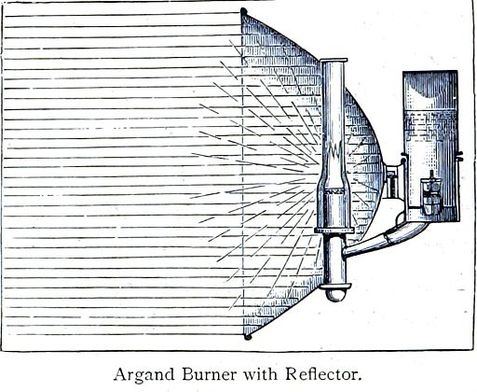 ​In the late 1700's, the Argand hollow wick tube was invented by Aime Argand, as shown above, this allowed for a bright flame and for oil to be above the light and drain into it by gravity.  Parabolic reflectors were often combined with the wick tube to produce directed beams.  Fuel varied from whale oil to vegetable oils,  lard, and even olive oil.  By the 1870's,  kerosene was a common fuel, and acetylene began to be used around 1900.
Frequently, several Argand reflectors were combined together in a single lighthouse mechanism.

Sometimes the entire mechanism was rotated by a handwound clockwork mechanism, later by electric motors.
Sometimes a refracting lens, light bottle-green in color, was placed in front of the system as well.

The next major advancement in lighthouse lighting was the invention of the Fresnel lens.  The Fresnel lens allowed 85% of the light the be directed in the beam, much more than with a plain lens or reflectors.  Invented by Augustin-Jean Fresnel in the early 1800's, the Fresnel lens thinner than a conventional lens, thus able to focus more light.  The lens itself is divided into a series of glass rings that each bend the light.  Older automobile headlights made of glass used this same design.  (More modern headlights are using reflectors and polycarbonate lenses.)

The Fresnel lenses were made in different sizes, from first "order", the largest lens - about 8.5 feet high, to the fourth "order" lens about 2 feet high, to a sixth order lens, about 1.5 feet high.  The larger lenses allowed for greater brightness and distance and were thus used in key lighthouses such as the Highland Light.  Lights requiring less distance used smaller, less expensive lenses of the fourth order.  Nobska Light, for example, still uses a fourth order Fresnel lens.
The Fresnel lens from the Nauset light is on display at the Salt Pond Visitor Center in Eastham and
​ from the Chatham Light at the Atwood House in Chatham. 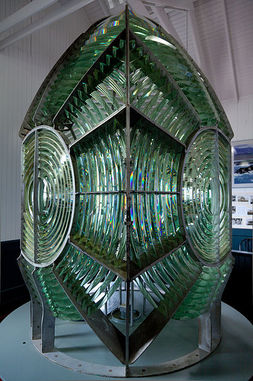 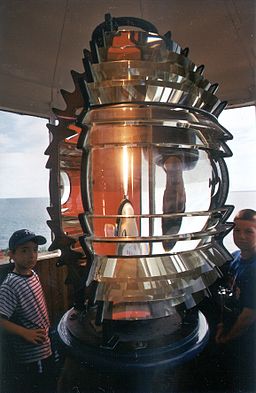 Pictowrit, Fourth Order Fresnel Lens, Nobska, CC BY-SA 3.0
During the early 1900's, electric lightbulbs began to replace the oil based lamps.  The most common bulbs were 1000 watt lightbulbs manufactured by GE.  Now, they are often powered by solar cells. In 2009, a new quartz halogen version of the 1000 watt bulb, with a ceramic base was introduced.  A few lighthouses have begun to use LED lights.

In the 1950's, Fresnel lenses were beginning to replaced by aerobeacons such as th DCB 24  (and eventually DCB 36 and DCB 224).  The aerobeacon is a cast aluminum drum with a built-in reflector.  In an aerobecaon, a single bulb can last up to two years.  The aerobeacons were lighter and less expensive than Fresnel lenses and could be used entirely outdoors, without the requirement of a lighthouse.  This is why some lighthouses were discontinued
​ and steel towers were used instead to support the beacons.

Several companies manufacture the beacons including Carlisle and Finch Company and Crouse-Hinds.

The most recent aerobeacon design is the VRB-25 aerobeacon,  designed in 1995 by a New Zealand Company (Vega) in conjuction with the US Coast Guard.  It is seen in the Highland Lighthouse shown in the image below: 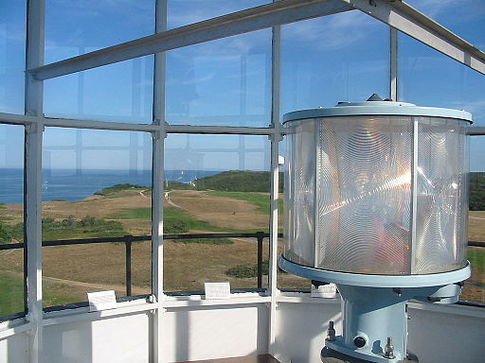 The VRB-25 has a bulb inside a series of rotating Fresnel lenses and can be installed without a lighthouse lantern structure at all.  Many object, though, to changing a lighthouse structure in this way, and prefer to keep the lantern, as is done in the Highland Light above.  The VRB-25 bulbs can last about 2000 hours, but can be set with multiple bulbs that automatically change if necessary; this can allow the system to run for up to 3 years straight. 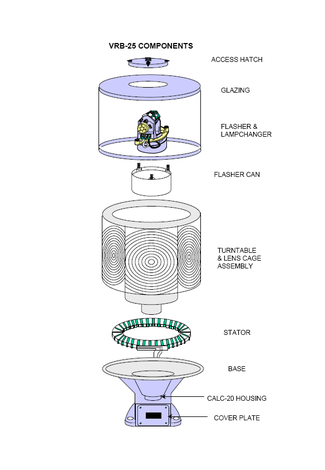 In the most recent versions of the VLB aerobeacon, the VLB-44 LED, LEDs are being used as the lighting source.
These will probably be the standard in the near future.​


Diagrams are all in the Public Domain.
​​  © All Text Content Copyright 2009-2021 by William E. Peace.
​All Rights Fully Reserved.
No duplication of any material by any means or for any reasons without written consent of the author.