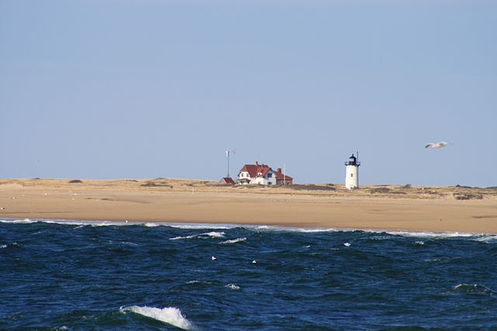 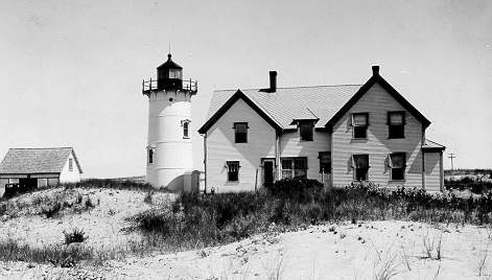 Race Point Lighthouse 1876
​​Race Point lighthouse is located at the very northwest tip of Cape Cod, looking out the Cape Cod Bay, Massachusetts Bay to the north, and out to the open Atlantic. It is the northernmost lighthouse on Cape Cod. Due to the heavy sand accumulation in the area from sand eroding along the eastern Cape Cod coast and moving north, this area has been the site of numerous shipwrecks.  The name "Race" refers to the strong currents just offshore. As early as 1808, requests were made by the town of Provincetown to build a lighthouse here.  Race Point lighthouse was the fourth lighthouse built on Cape Cod, in 1816.  It was 25 feet high, made of cobblestone and cement, and used light green lenses to focus the light. As at Long Point, during the 1800's, there were many people living in a small village here, making a living fishing and running salt works.

As time went on, the mortar around the cobblestones deteriorated, and the structure was covered with shingles to prevent leaking.  By 1873, the lighthouse was replaced entirely with a new 40 foot cast iron structure lined with brick, similar in design to the lighthouses at Nobska and Chatham. Originally painted brown, the lighthouse was soon painted white and is the same structure present there today. The lighthouse and several keeper's buildings were maintained and upgraded, and there were even three keepers at one point; despite all this work, accidents continued in the dangerous shoals of the area.  In the huge storm of 1888, for example, three ships washed ashore and hundreds of people were killed.

The Race Point area was so remote and difficult for family members to get back and forth to the area that in 1838 a dike, still present today, was built along Hatches Harbor to allow for an easier walk.  By the 1930's, modified cars were able to make the trek through the sand, much as they still do today.  In 1950, the lighthouse was electrified with a 1000 watt lightbulb and the system was automated in the 1970's. Presently a VRB-25 aerobeacon provides the light for the lighthouse and the building is solar powered with a wind-turbine backup supply also.