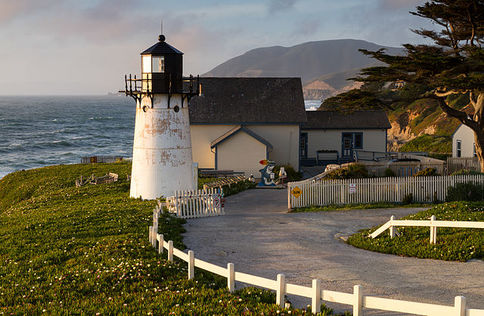 The street view at the top shows the current view of the old lighthouse keeper's home, with the harbor area to the left. Taking a few steps down the road to the left will also provide a view of the old oil storage shed, still on the property.  For many years, it had been thought that the lighthouse itself had been torn down and destroyed.  Recent research, though, has found that the lighthouse itself was brought 3000 miles away to California, in 1925.  Most likely, the sections of the lighthouse were unbolted from one another and transported  by train to California.
The lighthouse, as shown in the lower image above, is now at Point Montara, California, overlooking the Pacific Ocean about 20 miles south of the busy port of San Francisco.   The lighthouse is still operational with an FA 251 lens.

The lighthouse can be visited, but it is a long trip to Point Montara in California!  However, a youth hostel is now on the property, so you can stay at the lighthouse and see it close up!  Here is a short video from the Point Montara Youth Hostel site, with the lighthouse being shown during the first minute or so of the hostel tour.