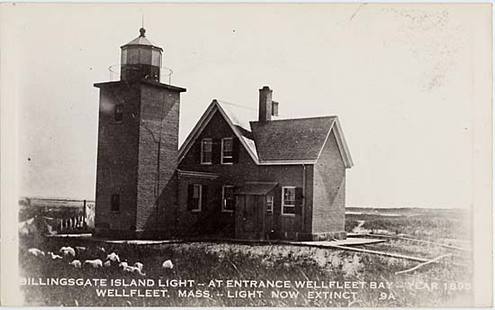 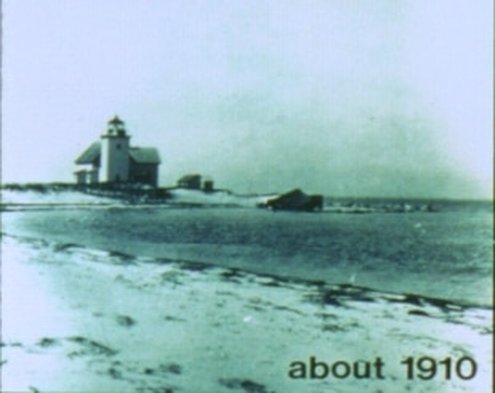 Billingsgate Lighthouse 1810
When the Pilgrims had landed on Cape Cod in 1620, they explored the area south of Provincetown and reported an island south of what is now Great Island in Wellfeeet.  The island which was 60 acres in size at that time, was later called Billingsgate Island, after the Billingsgate fish market in London.  The Pilgrims had noted  large numbers of fish in the shoals around the island.  This richness led to a village on the island of about 30 houses and even a school.  Because of its location looking over Cape Cod Bay, it was felt that it was a perfect location for a lighthouse, so in 1822, the Billingsgate Lighthouse was built a 40 foot brick lighthouse with a granite foundation.  Erosion of the island was dramatic, though, and many of the homes there were floated back to the mainland in the mid 1850's.

In 1856, a new lighthouse was built, but conditions continued to be bleak on the island - the lighthouse keeper at the time reported flooding of the tower in 1873, ice everywhere in 1875, and then more flooding in 1875, flooding that ultimately took his life.  The next keeper saw the same with five feet of water in the middle of the island during one storm in 1882.  In 1888, more than 1000 feet of stone jetties were build around the island to help to protect the lighthouse and the few buildings still there.  By 1915, though, the lighthouse began to lean into the water and its days were numbered; the light was removed.  By 1942 there was no longer any land left of the island.  Now, a few spots of rock can be observed there at very low tides, remnants of the tower itself and of the jetties that had built to protect it.
The area where Billingsgate had been can only be reached now by boat.  It is south of the very end of Jeremy Point, the southernmost tip of Great Island in Wellfleet.