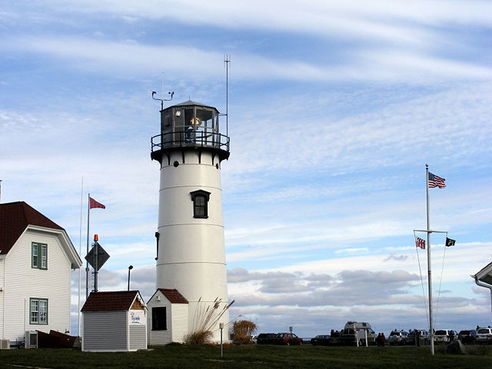 The second lighthouse to be built on Cape Cod was built in Chatham in 1808, on Jame's Bluff that looks out over Chatham Bars and the open Atlantic.  The idea was to provide a second key lighthouse along the treacherous outer Cape area.  In order to distinguish the location from the single Highland Lighthouse, two matching towers were built here in Chatham; they were known as the "Twin Lights".  One tower was also moveable so that they could be lined up with the available passageway through the Chatham bars. The forty-foot towers were built of wood and each included six lights with silver-coated reflectors.  By 1841, though, the towers had deteriorated and were replaced with brick towers at that time. But by 1879, both of those towers had tumbled into the ocean due to the continuing erosion of the cliff there.

​Two new 80 foot lighthouses were built at that time (1877), first using lard oil and then kerosene. The towers were made of cast iron, and lined with brick. In 1923, the northernmost of the two towers was removed and taken 12 miles north to Nauset Beach to become Nauset light - it is still there today.  The southernmost tower remains there today just to the left of the lighthouse keeper's house, which now serves as a Coast Guard Station.  The concrete foundation area from the northermost light can still be seen to the immediate right of the Coast Guard building. In 1939, the lighthouse was electrified with a 1000-watt bulb and an electric motor.  In 1969, the entire lighthouse top (lantern) was rebuilt and aerobeacons were installed to replace the light and Fresnel lens system.  The original lens is still on display at the Atwood House in Chatham.  The lighthouse was automated in 1982 and is still an important navigation light on Cape Cod.

The lighthouse is easily seen from the parking area at Chatham Beach on Main Street in Chatham.  The lighthouse can be toured on Wednesdays for several hours; the Chatham Chamber of Commerce can provide specific hours which are subject to change. 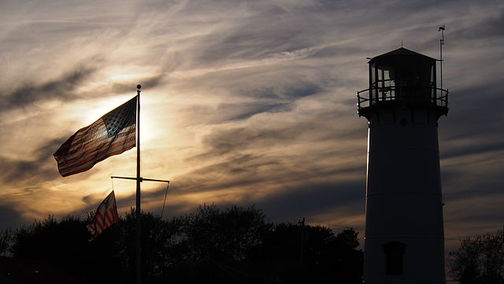