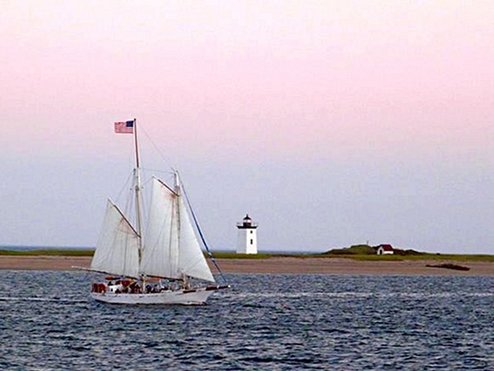 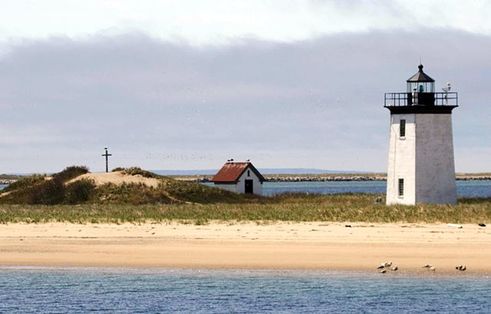 dbking, Long Point Light and Outer Battery, CC BY 2.0
Long Point Lighthouse was the seventh lighthouse built on Cape Cod, in 1826.  It is at the very tip of Cape Cod, overlooking Provincetown Harbor.  The first lighthouse built there was 35 feet high, in the center of the lighthouse keeper's house.  Today the area is a very desolate one, but in the early 1800's, it was a busy place, a village called Long Point, with dozens of homes. Salt works powered by the wind and sun used ocean water to make salt; this had become a common activity along the Cape coast.  There was also fishing from the area as well, with bountiful takes using seine nets right near the shore, so several hundred people were living here; there was even a school and a post office in the village.

But all things change, and by the mid 1800's, the salt works were no longer being used, and the area was all but abandoned. As the village itself died out, houses from the village were actually floated back to the town of Provincetown to be used there; the are still present in the West End of Provincetown, and denoted with blue plaques. By 1873, the original lighthouse building leaked seriously, had deteriorated itself, and needed replacing.  In 1875, the present 39-foot tall square brick tower was built, along with a new keeper's house.  The lighthouse design was almost identical to the Wood End lighthouse that had been built just a few miles away in 1872.

In the 1950's, the lighthouse was improved with aerobeacons and automated at that time.  In the 1980's, solar panels were installed to power the light.  At that time, all the keeper's housing was removed, leaving only the tower and the oil house.  The earthen mound near the lighthouse is all that remains of military outposts that were present at Long Point during the Civil War; local residents ridiculed the situation, noting that it was unlikely for Provincetown to be attacked.  The cross visible near the lighthouse is a memorial to Charles Darby who had loved the area,
​and who was killed in Europe during World War II.

Long Point is not easy to see except from the water. It is a long walk from Herring Cove Beach or from Provincetown over the breakwater to get to Long Point; there are boat shuttles, though, from MacMillan Pier.  There are no tours of the lighthouse; the light is still in use and is maintained by the American Lighthouse Foundation..  The grounds are part of the Cape Cod National Seashore and are open to the public. 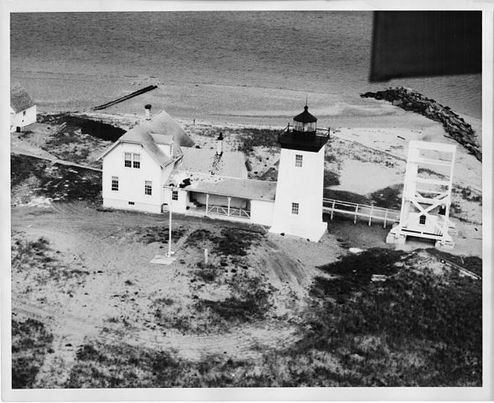 ​​  © All Text Content Copyright 2009-2021 by William E. Peace.
​All Rights Fully Reserved.
No duplication of any material by any means or for any reasons without written consent of the author.