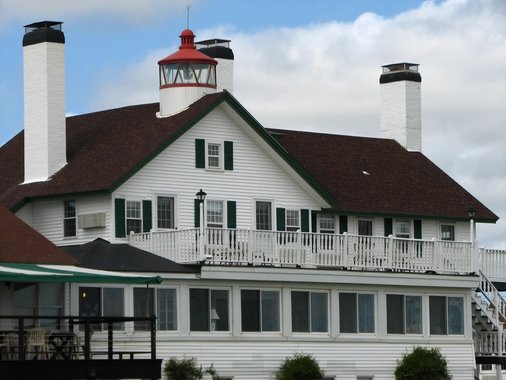 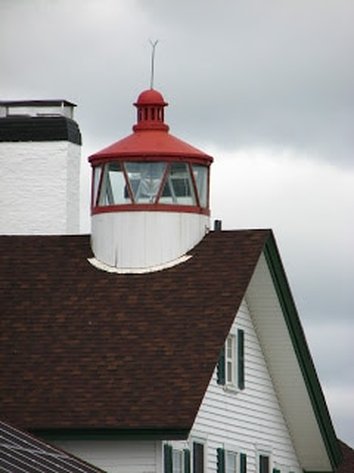 The area around Bass River in West Dennis had become a very important maritime area by the early 1800's.  Hundreds of ships visited the harbor at Bass River, schooners, packet ships, fishing ships.  There was a strong trade up and down the east coast, and ships rounding Cape Cod from Boston area would pass through Nantucket Sound on their way south, and often take up safe harbor in the Bass River area.  Indeed, a breakwater was built in the early 1800's, with the intent of creating a quiet water area right off what is now West Dennis beach and providing a spot for a lighthouse; the breakwater was not completed, but can still be seen about 1 mile off of West Dennis beach.  Mariners in the area had grown accustomed to a small private light placed in the upper windows of the Crowell home near West Dennis beach.

Finally, in 1851, a lighthouse construction was approved, but then quickly cancelled as unnecessary; mariners protested and by 1855, the Bass River lighthouse was completed.  A little over a mile east of Bass River, the lighthouse was built, as many at that time, in the center of the roof of the lighthouse keeper's home.  Interestingly, it is the only remaining light on Cape Cod that was built in this way; most had leaked severely and resulted in deterioration of the building, and thus most were replaced with independent towers.  The Bass River light guided vessels through the area, along with the Stage Harbor Light and the Point Gammon and Bishop and Clerks lights, for many years.  Then in 1880, the government closed the lighthouse, and then just a year later reestablished it.  When the Cape Cod Canal opened in 1914, though, marine traffic could avoid going around the Cape and thus the lights in the area were deemed less important;
as a result, the Bass River light was last used in 1914.

At that time, the property became private property.  In subsequent years, the extensive beach, a mile in length was sold to the town for use as West Dennis Beach, and the lighthouse building began to be used as an inn and restaurant.  During its use as an inn, the original building has been substantially enlarged to the sides, but the central portion of the building is still the original keeper's house with the light in the middle of the roof.  The current owner of the inn and restaurant restored the light in 1989 and presently, the light does operate as a private navigational aid during the summer months.  Several jetties were built by the owners to protect the beachfront after severe erosion in a storm in the 1950's.

The West Dennis lighthouse is readily seen from the eastern-most parking area at West Dennis beach; a short walk to the east will bring you to the end of the public beach area where the private inn beach begins, but excellent views of the lighthouse can be seen from the public beach area.  From West Dennis Beach, you can also (barely) see Monomoy Point Lighthouse, Bishop and Clerks Light, and Point Gammon itself, but not the lighthouse.  The ocean must be calm and the lighting just right to see these best.  Binoculars will help, too.
​But from West Dennis Beach, three different lighthouses plus Point Gammon can be seen.