In the early 1800's, the area around this lighthouse was a very different place than it is today.  The railroad that now ends at the train and bus station on Main Street extended at that time straight across Main Street, down Old Colony Road (hence the name) and to the ocean along Harbor Road.  The railroad ended at a 300 foot wharf; if you zoom out on the Google aerial view (top image), you can see remnants of the wharf still visible in the water.  The trains could load directly from the wharf onto ships harbored there or vice versa.  Coal, grain, lumber, and fish were important commodities being shipped here, mostly being brought in to Hyannis.  This was a busy spot, with the steamship to Nantucket docking here,
and many other ships mooring there as well.

The brick Hyannis Rear Range Lighthouse, also called the South Hyannis Lighthouse, was built in 1849 for $2000.  At 20 feet in height and shorter than most lighthouses, the lighthouse was designed to guide ships to the wharf.  An oil lamp with a reflector provided the light. In 1850-51, a keeper's house was added on and attached to the lighthouse itself by a covered walkway.  In 1885, an additional "front range light" was set up at the far end of the wharf, and the comparison of the front and rear lights helped to guide ships to the pier.  As the use of the railroad declined in the early 1900's due to increasing use of trucks and automobiles, the lighthouse was entirely shut down in 1929.  At that time, the property was auctioned and has been in private ownership since.

The lantern itself had been removed in 1929, not to be replaced until 1986.  At that time, the lantern was replaced by an 8- sided viewing room, built on the ground and raised by a crane to the top of the lighthouse.  A spiral staircase leads to the room, and the interior of the room is finished with teak and holly wood.  The house now serves as a private residence and houses an extensive collection of marine artifacts.  The interior of the home includes several murals showing lighthouses of the area as well as one showing the wharf that the lighthouse had protected in the 1800's.

The lighthouse can be seen at the end of Harbor Road in Hyannis, but is a private residence and is closed to the public.  Hopefully at some point in the future, the light itself can be restored so that the
fascinating history of the area can be shared by all. 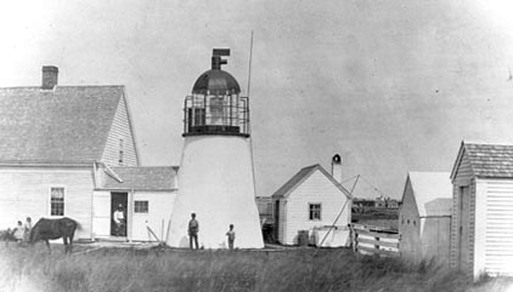 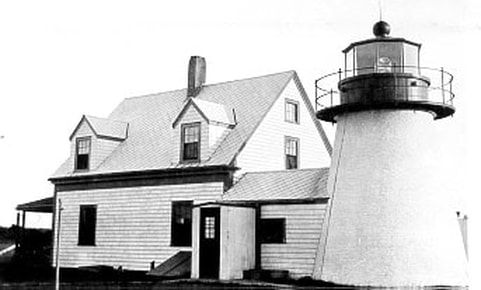