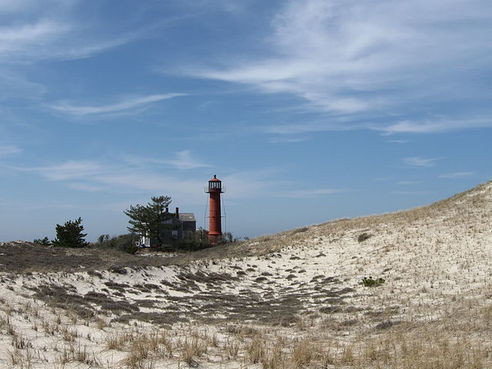 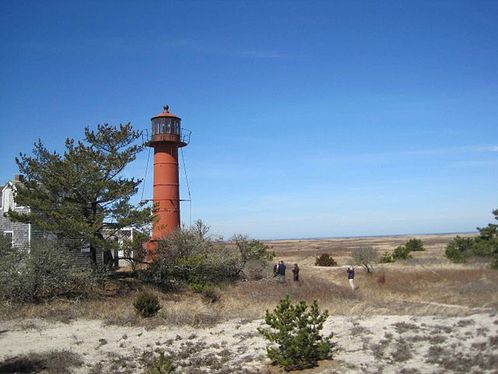 Monomoy Point Lighthouse
Monomoy Island is an eight mile sandspit extending south from Morris Island and Stage Harbor south into Nantucket Sound.  It is formed by the southward movement of sand from the eastern coast of Cape Cod as far north as Wellfleet. The area is a particularly difficult one for ships passing from the south north toward Boston or Maine, or vice versa, as there are many and changing shoals in the area.  As early as the 1700's, the Monomoy area had been used for fishing, though, and by the 1800's, a village of several hundred people existed on the Monomoy area.  Harsh weather affecting the harbor there, and crime in the village itself eventually sent all back to the mainland.  Presently, there are no residents on the island and it is a National Wildlife Refuge.  In recent years, the grey seal population has exploded near the Monomoy area, and this has also attracted great white sharks to the coasts of Cape Cod.

With the difficult navigation in the area, it was important to have a lighthouse here.  In 1823, the first lighthouse was built, in the center of the roof of the keeper's dwelling; it was the sixth lighthouse built on the Cape. But with the harsh weather in this area, by 1849, the lighthouse and building had deteriorated considerably and were replaced with a 47 foot high, cast-iron, cylindrical, brick-lined tower. This is the same tower seen there today. Braces and cables have been used to stabilize the structure over the years.  In 1882, the tower was painted a bright red; it is still that same color.  In 1923, with upgrading of the lighthouse at Chatham Light, and declining shipping traffic in the area overall due to the Cape Cod Canal, it was decided that the Monomoy Light was no longer needed, and it was shut down. As the island accretes sand at the tip, the lighthouse is now a little further back from the water than it was in the 1800's.
​
Boat taxis to Monomoy Island leave from the Morris Island area and there are boat tours from the area as well.  Once you reach the island, it is a very long walk to the lighthouse area itself, but you can be left much closer by the taxis if you wish.