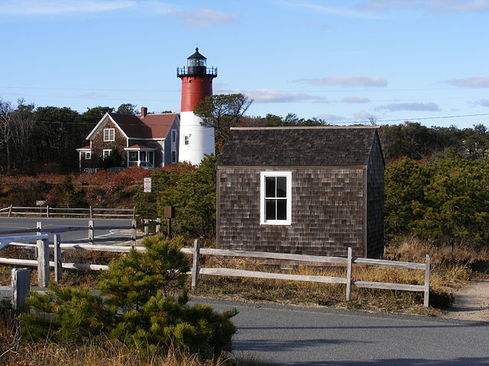 Nauset Lighthouse is situated high on the bluff in Eastham, looking out over the outermost shores of Cape Cod along the Cape Cod National Seashore, and directly out from there to the open Atlantic. At this location in 1837, three lighthouses called the "Three Sisters" had been built. When erosion threatened those three structures in the early 1900's, they were sold to private parties. In 1923, one of the two twin lighthouses in existence 12 miles to the south in Chatham was moved to this location, and that is the present tower that exists here today.  The tower itself is 48 feet high and is made of cast iron with a brick lining; its original construction in Chatham was in 1877.  In the 1940's, the originally-white Nauset lighthouse was repainted with red on the top half, creating an iconic symbol of Cape Cod -
it is the lighthouse on the Cape Cod Potato Chips packages!

Nauset Lighthouse is now maintained and operated privately by Nauset Light Preservation Society.  The dwelling on the property is private, but the lighthouse itself can be toured during the summer season.
Information about tours is at the Nauset Light page.

Here is a short video about the lighthouse: