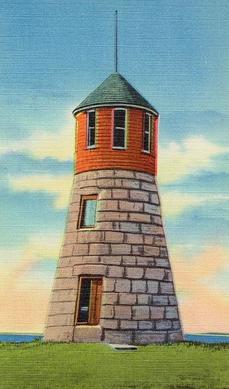 The third lighthouse built on Cape Cod is unfortunately sequestered away from easy public view in a gated community on Great Island in Yarmouth. The history of the lighthouse is very interesting, however. The "island" is actually a penisula that forms the eastern boundary to Hyannis Harbor, and Point Gammon is the southernmost promontory on the peninsula. The 20 foot lighthouse, towering about 70 feet above the sea, was built in at the Point in 1816 from cobblestones native to the area.  At the time, it was painted white, but is now unpainted. A small keeper's house was also built of stone at the same time. From 1816 until 1858, the light was operated by Samuel Peak and his son John.

The light served to guide vessels to Hyannis harbor until 1858 when the Bishop and Clerks light took over that function. John himself served as lightkeeper at Bishop and Clerks and then at the Hyannis Harbor light. The light was removed in the 1880's and the top of the tower was converted at that time to a bird observation area with the bottom used for a butterfuly colllection. The small keeper's houses was dismantled in the 1930's and used to build a home elsewhere on the island. In the 1970's, the lighthouse was renovated as a small home with the bedroom on the top.
​The tower has not been used as a lighthouse since 1858.

Unfortunately, the only way to view the lighthouse at this time is from the air or the from the water.  Hopefully at some time in the future, this important historic landmark will be restored as a lighthouse and open to the public.