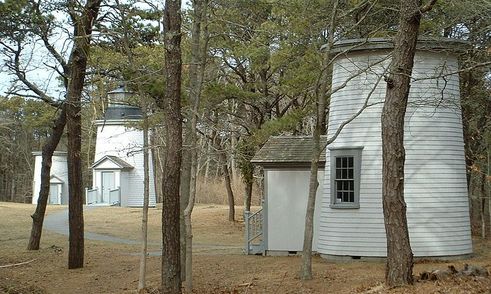 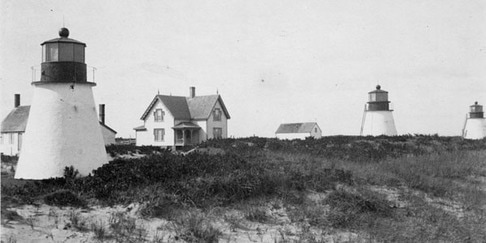 Original Three Sisters
In 1837, three 15 foot lighthouses were built on the bluff in Eastham several hundred feet to the east of where the current Nauset light is now located. Three separate lights were built to allow mariners to distinguish the one light at Highland light, the two twin lights at Chatham, and the new lights in Eastham; there was some controversy whether three lights were really needed. The towers were built of brick, and there were additional difficulties and disagreements with the quality of the contractor's work. Believe it or not, the lighthouses were not viewed positively by the locals at first. Some of the more unsavory members of the town would use bright lights along the shore to attract vessels, causing them to run aground - this would provide all sorts of financial opportunities, and the lighthouse put an end to this!

The towers used whale oil initially, and were upgraded with Fresnel lenses in the 1850's and again in the 1870's. With continuing erosion along the shore here, though, the brick towers were totally lost to the sea by the 1890's. At that time, three 22 foot high wooden towers were constructed 30 feet further inland, to replace the brick ones.  It was felt that the wooden structures could be moved back from the eroding shore if needed.  In 1911, two of the towers were retired from use, and only the center one continued to be used, called "The Beacon" at the time. By the 1920's, though, the wooden towers were all no longer used and were replaced by the single Nauset lighthouse still there today, which was moved from the Chatham twin lighthouse area, resulting in three single lights along the eastern-most coast of Cape Cod, Highland Light, Nauset Light, and Chatham light.

​Two of the three wooden towers had been purchased by a private party for a total of $3.50 and were incorporated into their home as towers to the sides of the main home. The third tower was used by another private party as a dwelling. By 1975, the National Park Service eventually obtained ownership of all three of the wooden towers, and located them all together to the west of the current Nauset Lighthouse where they were renovated in the 1980's. While in a wooded area where they could never shine a light over the ocean, they are oriented and separated by one another by the original distance that they had been separated when near the shore. Only one of the lights now has a lantern top.

The Three Sisters can be viewed at the Cape Cod National Seashore property on Cable Road in Eastham.  Tours are given just a few hours each week - you can check at the Salt Pond Visitor Center in Eastham to determine the current schedule.