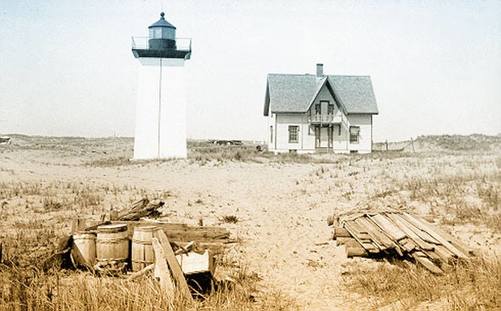 Wood End Lighthouse
The Wood End lighthouse is just a mile to the north of the Long Point Lighthouse, at the tip of Provincetown.  The area is one where, even after the lighthouses were built, dozens of shipwrecks have occurred due to the heavy shoaling of the area.  Sand eroded from the Cape's eastern shore, from Wellfleet and Truro, moves northward along the shore, and is deposited in the Provincetown area, creating huge shipping hazards.  The Wood End lighthouse was built in 1872, just after the Civil War.  During the War, a military fort had been set up here, and afterwards, the area was used for the lighthouse construction. The square based pyramidal 39-foot high tower was originally painted brown, but repainted to white just a few years later. The building is nearly identical to the Long Point lighthouse.

In 1896, the lighthouse keeper's home was rebuilt and an oil storage building was constructed also. Most importantly, the breakwater that can still be walked on at low tide from Provincetown to Wood End was built in 1911 to allow for easier access to the area by the lighthouse keeper.  In 1961, an aerobeacon was installed in place of the Fresnel lens and the station was automated.  The lighthousekeeper's house was removed also at that time. In the 1980's, solar power was installed at the lighthouse due to its remote location; it was the first lighthouse in Massachusetts to be outfitted with solar power.  The lighthouse presently uses a VRB-25 aerobeacon optical system with rotating Fresnel lenses.
​
Wood End is a little over a mile walk from Provincetown over the breakwater which can be walked on during low tide.  There are no tours of the lighthouse but the light is still in use and is maintained by the American Lighthouse Foundation..  The grounds are part of the Cape Cod National Seashore and are open to the public.